April 1, 20XX: Dr. Nathan Swan, age 40, chairman of the board of directors, chief executive officer, and founder of the Chem‐Med Company, was in his office staring at the ceiling, wondering if he would not have been better off still teaching biochemistry at the University of Toronto. This business was getting to be a headache. Only a short time ago he was able to spend most of his time in the company lab comfortably working with test tubes and formulas. Lately, though, it seemed that all his waking hours were spent with financial statements and spreadsheets, and in meetings. He wanted the firm to grow and make money, but he had no idea that the financial end of the business would be so demanding and complex.

Dr. Swan was a little mystified by financial matters. How could one describe a company in financial terms? How could financial statements indicate whether or not a firm was in good or bad shape? (The balance in the company chequing account didn’t seem to be an indicator.) How could one convince a group of hard‐nosed investors that the company was capable of making a lot of money in the next few years, if it just had more money now? (Dr. Swan was always puzzled by the fact that Chem‐Med was growing and making money, but it never seemed to have enough cash.)

Chem‐Med began operations 18 years ago after Dr. Francois Swan completed the development of commercial‐scale isolation of sodium hyaluronate (hereafter referred to as HA), a naturally occurring biological fluid that is useful in eye surgery and other medical and veterinary uses. The isolation process, complex and proprietary to the company, involves extracting and purifying HA from rooster combs. Initial seed money for the enterprise came from research grants from the University of Toronto and the federal government, plus contributions from Dr. Swan’s colleagues and associates, who were now classified as the company’s shareholders (254 as of April 20XX, all closely held; not traded publicly).

In mid‐20XU Chem‐Med commenced the manufacture and distribution of its first product, VISCAM, which is used to hold tissues in place during and after surgery of the retina. In March 20XV Chem‐Med received regulatory approval to market another HA product known as VISCHY, which is used for the treatment of degenerative joint diseases in horses. The two products, VISCAM and VISCHY, are the only ones Chem‐Med currently produces; however, the company has an active R & D (Research & Development) program investigating other applications.

There are only two other manufacturers of FDA‐approved HA products in the world: AB Fortia, a Swedish corporation, which manufactures a product called Healon in Sweden and distributes it in North America through a subsidiary, Pharmacia Inc., and Cilco Inc. in West Virginia. Chem‐Med has about a 25 percent share of the market (for HA products in eye surgery) against Cilco’s 16 percent and Pharmacia’s 59 percent. Pharmacia, with the power of giant AB Fortia behind it, waged a continuing marketing war with Chem‐Med, undercutting Chem‐Med’s prices and wooing its customers away at every opportunity. The matter came to a head in September 20XX, when Chem‐Med filed a $13 million suit against Pharmacia, charging unfair trade practices. Dr. Swan was reasonably confident that Chem‐Med would prevail in the suit, and in fact, Pharmacia had recently offered to settle out of court for $500,000.

Dr. Swan’s primary problem was that although he was convinced the company was sound and would grow, he wasn’t sure how to communicate that to potential investors in the financial community in a way that would convince them. Just handing out past income statements and balance sheets (shown in Tables 1 and 2) that he received from the accountants didn’t seem to be enough. Further, he wasn’t even sure the company needed outside financing, let alone how much. He just believed they would need it, since they had always had to ask for money in the past. 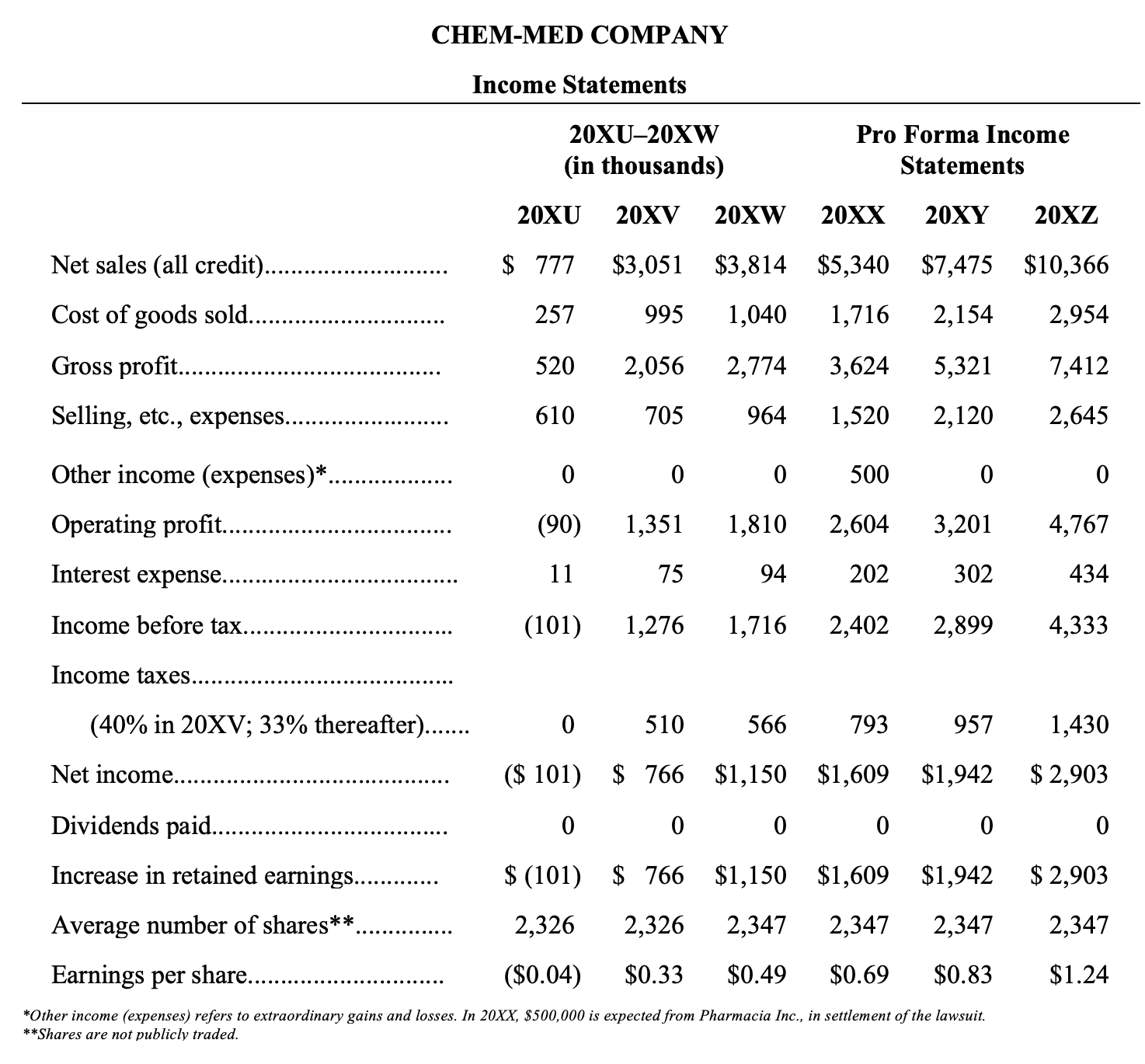 Dr. Swan had lunch with his banker recently, and the banker mentioned several restrictive covenants the company would have to meet if it came to the bank for financing. The three covenants were

Dr. Swan didn’t think he would have any trouble with those, but he wasn’t sure. He would have to analyze the numbers before the next board of directors meeting, but he now had to meet with a representative of a supermarket chain.

As a financial advisor you are considering the addition of Chem‐Med to your clients portfolio, you are interested in the company’s record of profitability, prospects for the future, degree of risk, and how it compares with others in the industry (shown in Table 3). From that point of view, write a report to your client addressing the following questions:

“You can order Corporate Finance 1 – ACCT 224 Assignment from our service and can get a completely high-quality custom paper. Our service offers any of the ACCT 224 Academic paper written from scratch, according to all customers’ requirements, expectations and highest standards.”