Vector-borne disease in the 21st century

Vector-borne disease in the 21st century

Vectors are the organisms that produce pathogens and gets transmitted between human. It mainly transmits from the animals than to humans. Vectors mainly carry bacterial organisms, viruses, and parasites. The insects are the host of humans that transmit these harmful pathogens. The bloodsucking insects mainly transmit to humans which is the new host where the pathogens transform and cause fatal diseases. Some of the species include mosquitoes, flies, bugs, sandflies, ticks, fleas, etc.

Some of the most common vectors borne that caused mortality to a vast population across the world are listed below: 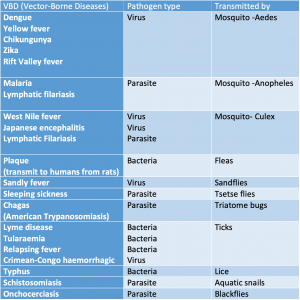 It is transmitted through a female mosquito Anopheles causing malaria when the parasite P . Falciparum which is the most common among 5 parasites of Malaria gets into the new host which is a human. Malaria causes a fever that feels like a flu illness and triggers the fever with chills. After the mosquito bite, the symptoms are visible after 7 days or more than that. The best treatment found for this disease is Artemisinin combination therapy (ACT). The major affected areas are Nigeria and the Democratic Republic of Congo.

It is a fatal fever that causes severe joint pains, low temperature, headache, swollen glands, and vomiting. Also, sometimes bleeding gums, and abdominal pain are also associated. There is no particular vaccine yet for dengue. But the treatment is done by maintaining the volume of body fluid. For over 50 years Dengue has affected more than 2 billion of the population across the globe. The major burden of the spread and the epidemic was witnessed in South East Asia, America, and Africa and also got reported from more than 100 countries. The primary vector to transmit is the mosquito Aedes and once the symptoms of dengue appear if another uninfected mosquito feeds from the infected person then it is the carrier of dengue for the next new host. Dengue can spread rapidly and can survive mainly in cooler and moist weather. Travelling with dengue before the appearance of symptoms is also a carrier to spread the disease.

It is also termed elephantiasis and is caused by a parasite named Filarial parasite. These are also spread through mosquitoes. This disease’ disadvantage is that it is not easily detectable as there is no major symptom for it. It affects the kidney and even damages the lymphatic system in the body. It can also get transmitted in childhood but with chronic disease, it might show the worst stage in adult age. These parasites can live long in the human body. Most infected areas are Africa, South East Asia, and some tropical regions. It is mainly transmitted through Culex.

It is a river blindness parasitic disease. When a person is affected with this disease then the skin gets depigmented and looks like leopard skin with intense itching. It also causes visual impairment, genitals, and blindness. This disease symptoms appear after 1 to 3 years of getting infected. It is 2nd leading VBD that causes blindness, Major infected areas are Guatemala and Brazil. Also, it was witnessed in Colombia but they eliminated this disease in 2013. It is caused by Onchocerca Volvulus parasitic worm that can survive more than 14 years in a human body. It is transmitted through the Blackfly bite.

Statistics on VBD (source: WHO)

Other VBDs mentioned in the list are also fatal and have different impacts on the human body. But public health officials, and WHO has taken a lot of precautions to prevent the spread and improve the condition of living. Also, much medical research is still going on for better treatment facilities for these diseases. Special focus on the quality of water used, supporting countries through different detecting sensors. Sanitisation has become frequent in all the regions as per governmental standards to protect from these insects.